Waverton is a quiet, harbourside suburb on the Lower North Shore.  It is only four kilometres north of Sydney’s CBD and offers stunning views of Sydney Harbour.

Waverton is bordered by the cosmopolitan business district of North Sydney and the exclusive waterfront suburb of McMahon’s Point.  The suburb is only one square kilometre in area.

Waverton was named in 1929 after the Waverton Estate of an early resident, Robert Old. The land once belonged to William Carr, who named it after an English village connected to his family.

The North Shore railway line was extended south from St Leonards to Milsons Point in 1893. The station in the Waverton area for nearly forty years was known as ‘Bay Road’, after the thoroughfare that crosses the railway line. The local progress association recommended a change and the name of Waverton was chosen in 1929.

Waverton has a village-like collection of shops around the railway station, including a supermarket, bottle shop, other small retailers and several restaurants and cafes.

Waverton Park offers a football and cricket field and the popular Merrett Playground for children.  The park is also home to Waverton Bowls Club and presents several lookouts that offer exquisite views of Sydney Harbour and Berrys Bay.  There are no schools in Waverton, but it is only a five minute journey to the North Sydney Boys and North Sydney Girls High Schools.

The Sydney CBD is easily accessed from Waverton by road and rail using the Sydney Harbour Bridge and Harbour Tunnel.  Waverton Railway Station is only a 15 minute trip from Central Station and is on the North Shore line of the CityRail network.

The majority of residents in Waverton are employed in professional occupations, earning salaries above $103K per annum.

Properties for sale/rent in Waverton: 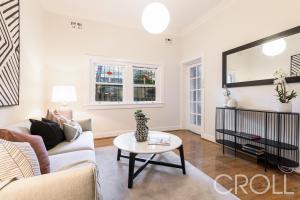