Cremorne Point was known as Wulworra-Jeung by the Cammerigal, the Aboriginal people who inhabited the land prior to the arrival of Europeans. The location’s natural sandstone cliffs and rocky overhangs were ideal for shelter, fishing and ceremonial activities.

This harbourside suburb is located about 6 kilometres north of the Sydney central business district, sharing its postcode with Cremorne which is a separate suburb to the north.

Cremorne Point is known for its superb views and its quiet leafy walks. It is a short 8-minute ferry ride to the city and offers abundant walking tracks, a public harbourside swimming pool and several pleasant picnic spots.

Cremorne Point was once largely owned by James Milson Jnr who profited greatly from selling this land for residential blocks in the last years of the 19th and early years of the 20th centuries.

Fortunately for us, the courts prevented him from selling building blocks running down to the water's edge, so Cremorne Point and its neighbouring suburb of Cremorne today form one of the few Sydney Harbour peninsulas with a publicly accessible waterfront park running around its edges.

On the tip of The Point (which is actually named Robertsons' Point) walkers can follow the path along the western side and enjoy superb views of the Opera House, the Sydney Harbour Bridge and city skyline.

Access to Cremorne Point is afforded by both public and private transport. Cremorne Point has a ferry wharf located on the south-western side of the peninsula, and regular bus services connect the area with the services that run along Military Road, carrying passengers to and from the city and the northern beaches.

Although Cremorne Point residents no doubt enjoy their distance from the busy nearby retail hubs of Cremorne Junction and Neutral Bay, they’re never far from the conveniences of shopping and dining in those precincts when they feel like venturing out.

The primary age group of Cremorne Point occupants is 30-39 years.   24% are purchasing their property, 29% own their home outright, and 45% are renters.  The majority of working Cremorne residents are in a professional occupation.

The median sales price of homes in Cremorne Point is about $1.5 million, and for units it’s around $620K.

Properties for sale/rent in Cremorne Point: 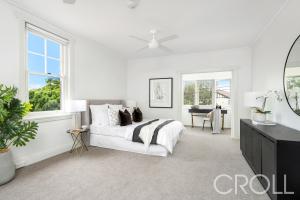 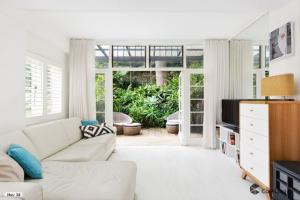 A chic studio apartment located in a coveted harbour-side enclave. The apartmnet is positioned in a peaceful block tucked back from the street frontage in the waterfront reserve area of Cremorne Point. Only footsteps to the iconic Cremorne Point foreshore walking path and Macculum pool to ensure a true Sydney Harbour lifestyle experience. Flooded with natural sunlight presenting a spacious open plan living area which flows to private courtyard ... more