St Leonards is a busy, fast paced suburb that provides easy access to the centres of Sydney, North Sydney, Chatswood and the Northern Beaches. It is positioned on the Pacific Highway, eight kilometers north-west of the Sydney CBD.

St Leonards was named after the English statesman Thomas Townshend, 1st Viscount Sydney of St Leonards. Originally, the name of ‘St Leonards’ was applied to the whole area from the present suburb of North Sydney to Gore Hill.

The Gore Hill cemetery was established on the Pacific Highway in 1868 and was the main burial site for the area until its closure in 1975. The oldest railway station on the North Shore line opened in 1890 in St Leonards and originally ran only as far as Hornsby.

Today, St Leonards contains one of Sydney's biggest suburban skyscraper clusters, with major offices for many large companies that are household names in Australia.

The Forum, which was completed in 2003, is built over St Leonards railway station and comprises three commercial office buildings, two residential towers containing 782 apartments, a supermarket, and 34 food and retail shops.  The suburb's tallest building is the Forum I, with panoramic views of the city skyline.

St Leonards railway station is on the North Shore Line of the CityRail network. The suburb is around twenty minutes or 8 kilometers away from the centre of Sydney by train and just 4 kilometers from Chatswood.

St Leonards is easily accessed by road, with the Pacific Highway running through the middle of the suburb. Buses are a popular transport option, with frequent services to North Sydney, Neutral Bay, Manly, Chatswood and the centre of Sydney.

St Leonards has a number of shops, restaurants, bars and hotels. A short distance away is Chatswood Westfield, which draws shoppers from all over Sydney with its mix of major chain stores and luxury brand shops.

Royal North Shore Hospital is located on the Pacific Highway in St Leonards.   It is a major metropolitan hospital servicing the North Shore area. The suburb also contains a campus of the University of Technology.

St Leonards is largely characterised by the large apartment buildings that line the Pacific Hwy and surrounding roads.  It is therefore not surprising that most of the dwellings in that area fall into the high-density category.

Properties for sale/rent in St Leonards: 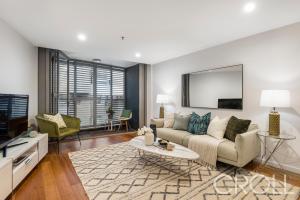 In the heart of vibrant St Leonards / Crows Nest you will find this conveniently located, oversized, modern apartment offering privacy and security. The complex presents modern facilities including internal light shafts and curated gardens. Located on an elevated level you will enjoy high ceilings and cooling breezes flowing from the covered private balcony flowing off the living space. Centrally located with easy access to a myriad of transport routes ... more