Milsons Point is a suburb on the lower North Shore of Sydney, located just 3 kilometres north of the Sydney CBD. It is also a geographical feature that juts into Sydney Harbour from the northern shore, directly opposite Sydney Cove where the first European settlement was established in 1788.

Milsons Point was named after James Milson (1785-1872), one of the earliest settlers in the area. He was a free settler, originally from Lincolnshire, who moved into the then-almost uninhabited district in 1824 when Governor Brisbane granted Milson a total of 350 acres (1.4 km2) on land fronting the Harbour.

Sadly, in 1830 after a house fire in which all his land deeds were destroyed, a legal dispute reduced Milson's holdings in the area to just 50 acres (200,000 m2) back from the Harbour.

As compensation for the lost land, he was granted a holding that now encompasses the suburbs of Thornleigh and Normanhurst. Milson subsequently established a profitable business supplying ships with stone ballast, careening services, fresh water, and the produce of his farms.

Milsons Point today supports the northern end of the Sydney Harbour Bridge. It is well connected with the CBD of Sydney by the Harbour Bridge, ferries and trains. For those who prefer to drive, the Warringah Freeway provides a link south to the Sydney CBD and north to Chatswood.

Milsons Point railway station is on the northern approach to the Sydney Harbour Bridge. The Milsons Point ferry wharf, located to the west of the bridge in the south-west part of the suburb, is serviced by the Balmain, Pyrmont Bay and Rydalmere ferry lines.

Milson's Point is also serviced by buses that run to the Lower North Shore and Northern Beaches.

Milsons Point has a mixture of residential and commercial developments. High density developments are located close to the railway station and include a number of popular restaurants and shops.

The median price for homes in Milsons Point is about $1.4 million, and for units is around $1.10 million.

The majority of the area’s population is in the 20 – 39 year age group, and 45% of those employed are in professional occupations.

Properties for sale/rent in Milsons Point: 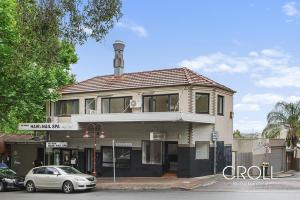 This multi-use retail property offers a range of opportunities for an enterprising operator looking for an outstanding location in the hub of one of Sydney's most sought-after suburbs. Commanding a prized corner position close to the vibrant Kirribilli Hotel and chic Botanic Bar you will find this charming two-level restaurant-ready property. Combining great street presence with character features including funky black & white paintwork, polished timber floors and traditional rail ... more