Wollstonecraft is a pleasantly prosperous harbourside suburb on the Lower North Shore of Sydney. It is five kilometres north-west of Sydney’s CBD and is just one square kilometre in area.

It is a suburb distinguished by fine homes and, increasingly, quality apartments that proliferate among the hills. Many have million dollar views across the harbour to the suburbs of Birchgrove, Balmain, Woolwich, Hunters Hill and beyond.

Wollstonecraft is bordered by the affluent suburbs of Crows Nest, North Sydney and Greenwich.

There are a few restaurants in the small area of Wollstonecraft. However, many residents also dine out in nearby suburbs just a short stroll away, such as Crows Nest where cafes and restaurants line the main streets.

Brennan Park is a heritage listed park in the heart of Wollstonecraft on Hazelbank Road. The park is a popular weekend spot for children and families in the region and offers spectacular views of Sydney Harbour.

Berry Island Reserve is another popular recreation area. It features a variety of different playgrounds and a unique Aboriginal interpretive walking track through the bushland.

The busy Pacific Highway skirts Wollstonecraft and is the main artery for people heading north out of Sydney. Wollstonecraft is only a short drive from Sydney’s CBD, over the Sydney Harbour Bridge. Buses operate frequently to and from the CBD via Wynyard Station.

Wollstonecraft Railway Station is on the North Shore line of the CityRail Network and it’s approximately a twenty minute trip to Central Station. Services run north to Hornsby and south to the CBD before continuing west to Burwood, Parramatta and Penrith.

The predominant age group in Wollstonecraft falls between 30-39 years. 50% of residents are renting their homes, 25% own their homes outright and 23% are purchasing their homes.

The majority of residents in Wollstonecraft are employed in professional occupations, earning salaries greater than $103K per annum.

Properties for sale/rent in Wollstonecraft: 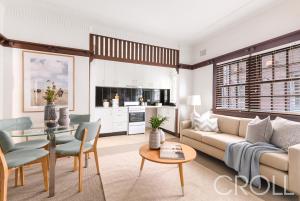 This multi-use property presents a spacious, updated two-bedroom apartment ideally located in the heart of Crows Nest Village, and is positioned with easy street-frontage access. 'Elston Court' is a charming Art-Deco boutique block brimming with original features including high-ceilings, picture rails, skirting and decorative windows. Perfectly suited for a home and work space, the sunroom /office has a direct separate entrance and would make an excellent studio, or professional suite. ... more